Iconic Wedding Dresses – Through the Years

Iconic Wedding Dresses – Through the Years

From royalty to celebrity, the last few decades have provided popular culture with some iconic moments as the most beautiful brides in the world walk down the aisle to say I do.

Let’s take a look at the most famous brides and their equally as famous gowns that made headlines and brides to be sigh the world over:

Not quite royalty but considered as such in her homeland of the USA, Jackie Kennedy wore a gown by designer Ann Lowe of New York. This young power couple went on to become one of the most iconic love stories of the century due to husband John F Kennedy being assassinated during his role as President in 1963 while Jacqui sat beside him in the now very famous motorcade. Ten years prior to that Jacqueline Kennedy walked toward her handsome husband in a full skirted gown with white gloves and traditional veil. Her inimitable personal style was revered throughout the world’s modern women. 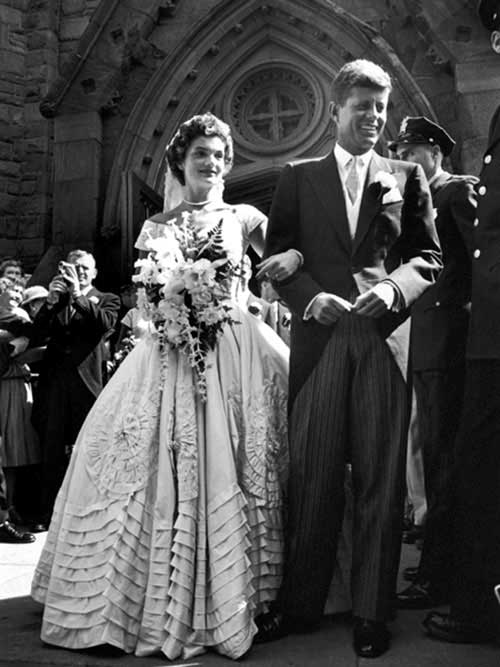 No wedding dress list would be complete without including Grace Kelly. Married in 1956 to Prince Rainier of Monaco, actress Grace Kelly wore a wedding gown designed by Helen Rose who was an MGM costume designer. It is reported that twenty five yards of silk taffeta was used to create this iconic gown and it also featured hundreds of pearls and exquisite antique rose point lace. A true classic. 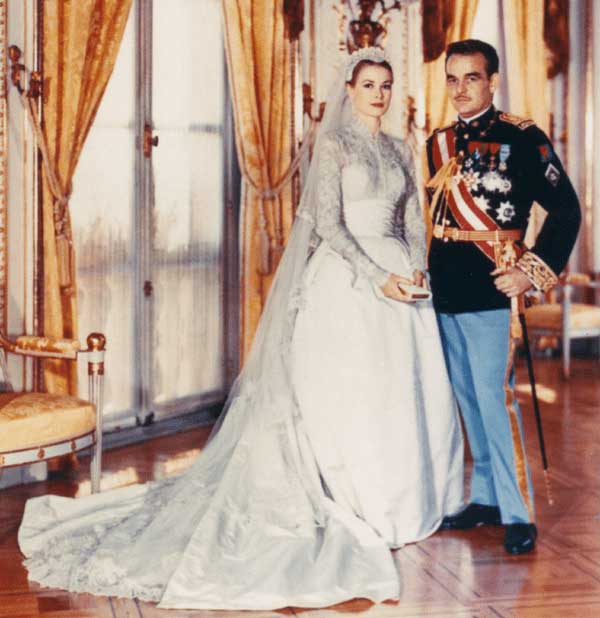 The “swinging 60’s” was an era of great change in music, politics and fashion. Empire lines were popular and the wedding gown of doe eyed, young Pricilla Presley reflected this fashion trend as seen here, cutting an extremely extravagant cake with her uber famous groom Elvis. 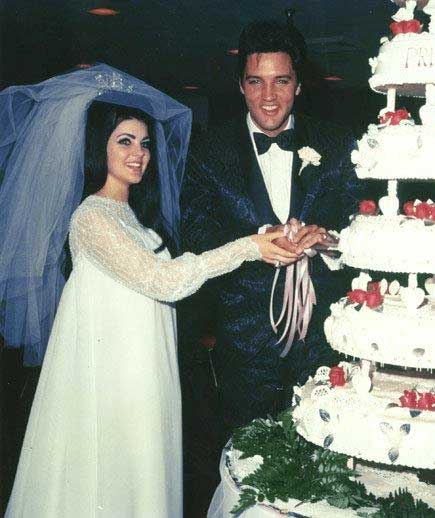 Married in 1971, Bianca and Mick Jagger, were fashion forward and set trends as easily as they breathed air. Bianca chose a YSL Smoking Jacket and overstated hat to walk down the aisle with her rockstar husband and it was truly a great moment in magnifique chic style. Like everything associated with the Rolling stones front man, the wedding was anything but quiet and the couple chose St Tropez for the location. 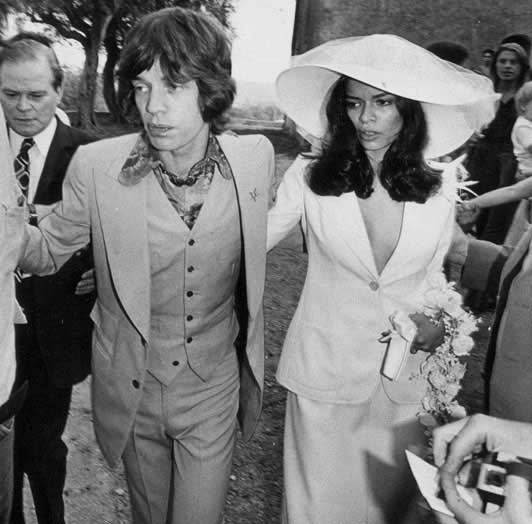 The 1980’s was the era of excess. With so many puffy sleeves and frills to choose from we’ve narrowed our most iconic bride of the decade down to Diana who’s gown featured every excess associated with the time. Causing a sensation as she emerged from the carriage at St Pauls, Diana’s dress was so volumous, she could not share the coach with her father who instead needed to travel separately to accommodate the gown. Dubbed a “fairytale” wedding, the royal couple exchanged vows to an audience of 3500 guests in the cathedral and over 750 million television viewers world wide. 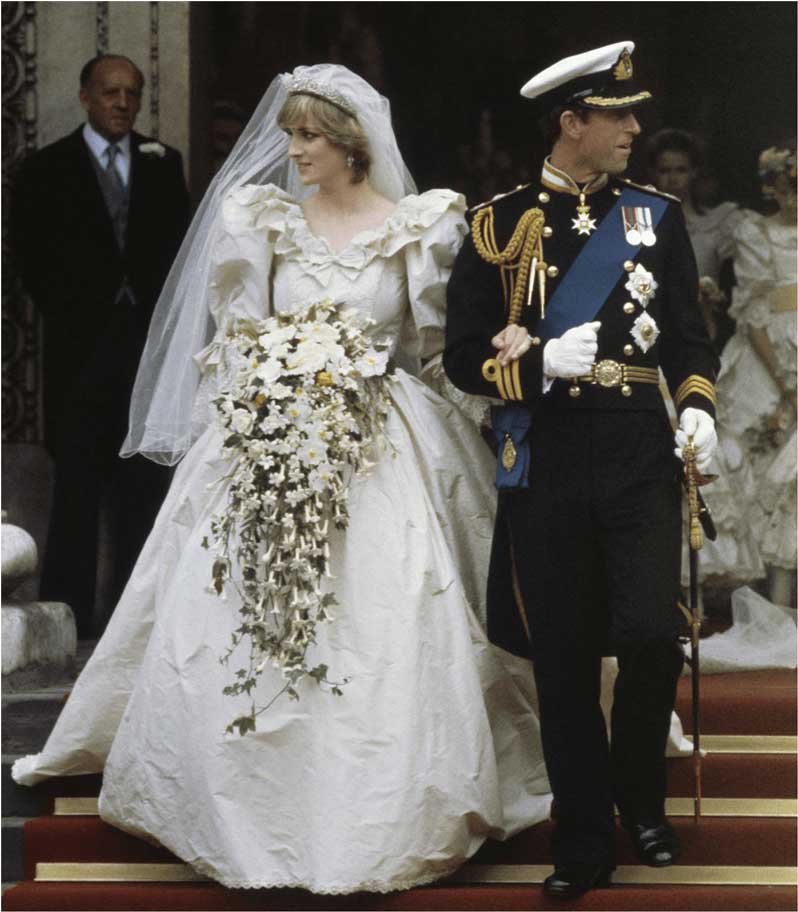 While the famous matching purple Antonio Berardi outfits that the Beckhams sat atop of their custom made throne in, made all the headlines at the time, Victoria Beckham actually wore a gown by legendary designer, Vera Wang to marry her soccer star husband David in 1999. Colour is on trend admittedly and the couple could be considered to be ahead of their time, the more traditional gown with the princess style tiara was the one befitting of Victoria’s Spice Girl persona, “Posh” we think. Both choices were certainly representative of the OTT excess of the 90’s. 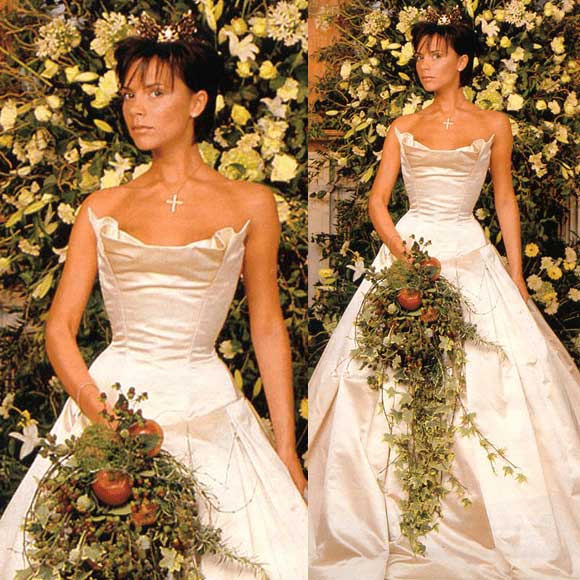 It would be hard to go past this iconic wedding as the most memorable of 2008 for so many reasons. After California passed same sex marriage laws, Ellen and Portia decided to celebrate and formalize their long time union officially. Ellen went with her trademark look of pants and teamed them with a flowing shirt and vest ensemble while Portia chose a more traditional look. Portia’s gown featured layers of soft pink tulle and a sexy plunging neckline designed by Zac Posen. Both women were stunning and the joy of their history making day was evident in both blushing brides. 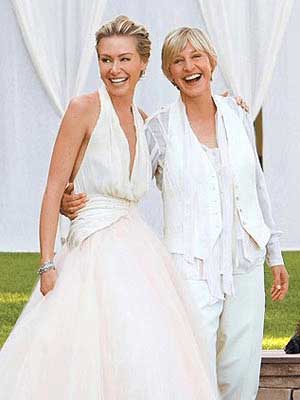 Wearing John Galliano and looking like an ethereal nymph, this British super model was every bit the beautiful bride when she exchanged vows with her husband in 2011. The dress is so iconic that it was part of a bridal exhibition in the Victoria & Albert Museum during 2014. Inspired by the classic chiffon bridal style of the 30’s, the gown has been credited by Galliano himself as responsible for his return to design. 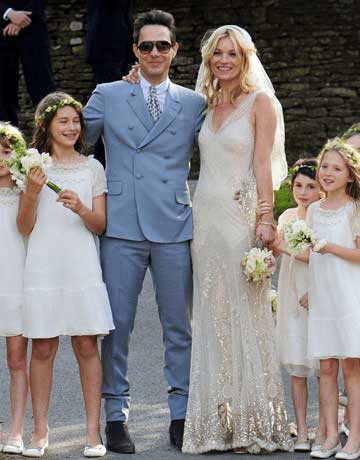 The Duchess of Cambridge

A true Cinderella story, Kate Middleton met her real life Prince Charming while studying at University together. Alexander McQueen’s creative director (Sarah Burton) was charged with designing the gown for Kate although this was the best kept secret in the world in the six month engagement and design period. Kate’s adoring public did not get even the tiniest glimpse of the now world famous gown until she stepped out of the royal carriage to enter Westminster Abbey and marry Prince William. Classically beautiful and fit for a princess, the gown sported a more modern plunging neckline than we’ve seen from royalty in the past and was heralded as a triumph for the designer and Kate’s official entry into the royal family. Special mention must be made though of Kate’s Maid of Honor, her sister Pippa’s bridesmaid dress. The figure hugging dress almost stole the show world over as it clung to Pippa’s curves and caught the attention of viewers around the world as they watched the wedding on television. 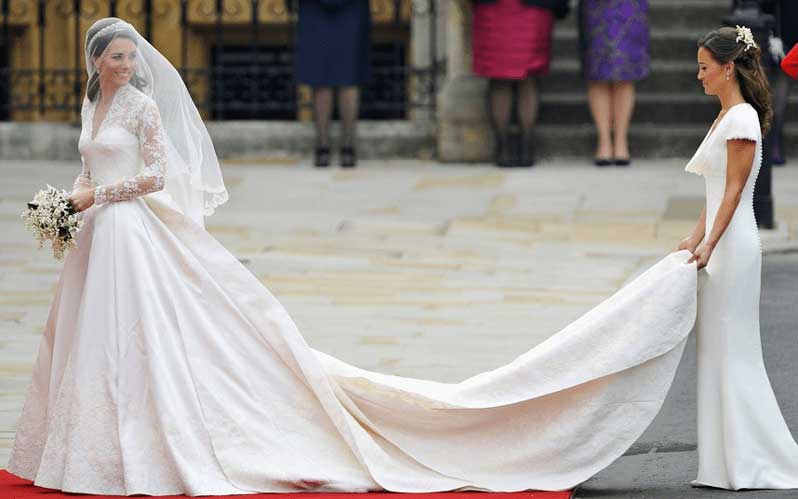 Looking back over the years at the most iconic wedding dresses of the last few decades, it’s easy to see why these brides made headlines for their grace, style, fashion forwardness or opulence. In many cases, these were the brides that the everyday girl modeled her own fairytale wedding plans upon.

Whatever your fairytale involves, though, we can help you write your story with the gown of your dreams.